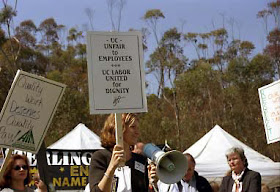 By Bob Samuels, UCLA and editor of Changing Universities.

People in higher education now know that over 70% of the faculty are working outside of the tenure system.  It has also been documented that most of these “contingent” faculty members earn less than fast food workers, and they have no job protections or benefits.  What needs to be articulated is how to resolve these issues, and fortunately, the labor conditions at the University of California can serve as an existing model for academic justice for non-tenure-track teachers.

In the UC system, lecturers represented by UC-AFT (University Council of the American Federation of Teachers) have a clear pathway to job security with relatively high pay and full benefits (including pensions).  These teachers also at times have a strong role in departmental governance and curricular development and have their academic freedom protected.  Although, there is still plenty of room for improvement, at one of the largest   public university system in the country, activism and organization have led to a model that should and can be replicated throughout the United States.

In 2012, the average annual salary for the over 3,000 UC non-tenure-track faculty was $62,000 with an average full course load of six courses on semester campuses.  This means that the per course pay was over $10,000, while the national average appears to be around $3,000.  Moreover, unlike most other faculty working outside of the tenure system, UC lecturers who work more than 50% time have full medical, dental, and vision care, and they participate in a defined benefits pension plan.

This model of labor justice is protected by a very detailed contract, which protects many of the faculty against job insecurity.  Similar to the traditional tenure-track career path, non-tenure-track faculty in the UC system go up for a comprehensive review in their sixth year of teaching, and if they are deemed excellent, they are given a continuing appointment, which means that they can only be let go for just cause or a proven lack of instructional need.

A key aspect to the contract regulating these faculty members is that it recognizes the diverse employment needs of contingent faculty members.  Except for benefits, all rights and salary policies apply to all faculty members regardless if they teach a single course or a full load.  By basing compensation on a percentage appointment, the university is able to cater to its particular needs, while the union is able to provide for a just and fair wage and work level.  While a third of these teachers work full time, another third teach only one or two courses a year.

The reason why this type of appointment system is so important is that one of the biggest obstacles to treating non-tenure-track faculty in a fair and equitable way is that there are many different employment contexts for these types of positions, and some part-time faculty members do not want to be full time.  In fact, in the UC system, the majority of the lecturers working less than 50% may have other jobs inside and outside of the university.  Some of these lecturers are fully employed lawyers, doctors, and artists who only teach one or two courses a year.  These professionals help to bring expertise to particular programs, and the union has recognized the need to allow the university the ability to employ these people without giving them benefits or requiring them to do departmental service.  However, the union also has to  constantly fight cost-cutting administrators who circumvent the contract and try to exploit non-tenure-track faculty by paying them as little as possible.

While the UC-AFT contract provides a clear pathway to job security, only a third of the current employees have passed their six-year reviews.  It is also the case that many lecturers only teach once in a while, so they never reach their sixth year.  Furthermore, since lecturers have to go through a thorough review to gain continuing appointments, many leave or are not rehired before their sixth year.

Since our contract does allow for a wide variety of employment situations, university administrators cannot say that they need non-tenure-track faculty to provide administrative flexibility.  Moreover, due to the high level of turnover in the first six years, departments are able to adjust to real changes in enrollment and instructional needs.  However, the union contract prohibits departments from not rehiring lecturers simply to prevent them from gaining continuing appointments or to replace them with less expensive lecturers.

Another vital aspect of this contract is that it stops departments from using student evaluations as the main criteria for judging lecturers. This means that departments have to develop robust methods of assessment, which are centered on the peer review of instruction and professional development. In fact, lecturers are required to show their knowledge of their field, and they are able to apply for professional development funding to stay current.    Furthermore, lecturers are often given course credit and pay for doing extensive departmental or university service.  For example, many of the UC writing programs are staffed by full-time lecturers who teach most of the courses and do most of the administration.  While the full-time maximum course load is nine courses for the campuses on the quarter system, a course load of eight courses is considered a 100% appointment for teachers of writing and languages.  The contract also provides a method for faculty to petition for course credit for non-required duties, such as proctoring exams and external outreach.

It should be pointed out that the UC-AFT contract is very detailed and defensive because it has been developed in response to the many different ways administrators have tried to go against the intent and language of the regulations.  Thus, an effective grievance process has been required to stop departments from trying to prevent lecturers from gaining continuing appointments.  We also have had many cases where departments have not followed their own policies when they review lecturers, and therefore it has been important to closely monitor and enforce the contract.

In fact, during the fiscal crisis of 2008-9, some campuses did try to lay off many lecturers with continuing appointments.  Through political activism and difficult grievance work, we were able to save virtually all of these jobs.  For instance after UCLA issued one-year layoff notices to almost all of the continuing appointments, our union worked with students and other concerned faculty groups to protest against the potential loss of hundreds of classes and a rapid expansion of class size.  We also met with many university officials to show them that lecturers were teaching a majority of the required undergraduate courses, and there was no one else qualified to teach these needed classes.

Since lecturers play such a central role in undergraduate instruction, we have been able to use our contract to protect the funding and quality of undergraduate education in the UC system.  Part of this work has required us going to the state legislature and pushing for audits on workload and campus funding.  One of the results of these audits was that the university has completely changed how it funds the campuses and what it does with student tuition and state funding.  Amazingly, until we helped to reveal the truth, parents sending their kids to UCSB did not know that their tuition was actually being sent to the central Office of the President where it was then being redistributed to the wealthier campuses.  In 2012, partially as a result of the state audit we initiated, the system moved to a structure where the ten UC campuses keep all of their tuition funding.

One of our challenges has been to get the university to provide a more transparent budget.  Like many other universities and colleges, the UC engages in many different types of hidden cross-subsidizations.  Undergraduate tuition is often used for graduate education, and instructional funds find their way into research budgets.  In order to correct this situation, we have lobbied hard in Sacramento for increased budget transparency because we know that the defunding of undergraduate budgets not only hurts lecturers, but it also downgrades the quality of undergraduate instruction.

One of the keys to our success is a recognition that research professors are often focused on graduate and professional education, while the bulk of the undergraduate classes are handled by non-tenure-track faculty.  Although, some may say that we have helped to institutionalized a two-tier system, we would respond that we have made the current system much more fair and just as we have also protected undergraduate education from unstable funding.

Having a union with required membership fees and a connection to a statewide and national organization has allowed us the opportunity to challenge our administration on a whole host of issues ranging from online education to pension funding.  We have also worked with a coalition of the different unions within the university to fight administrative growth, salary inequities, and benefit reductions.  In other words, politics and organization infuse everything we do.