Two years of context helps to understand the state Democrats' plan for UC, expressed in the Governor's budget proposal this month.

In November 2019, UCOP sought to end UC's worst modern budget decade with a some meaningful funding growth. The 2010s had brought many negative net revenue effects:

for flagship details; see "The Essential Charts" for the twenty-year system pattern. Funding crises have long been visible on the campuses: UC Berkeley's VP for Finance and Administration called the funding model unsustainable in 2013.

Such news doesn't usually make it into presentations to the regents, so in this context UCOP's November 2019 budget document was unusually graphic.  It identified many areas of functional deterioration at UC. These included sharp increases in the number of students per ladder-faculty member, the same for student:staff ratios, and faculty salaries that had spent at least 20 years at around 10 percent below comparators.

The document identified a chronic problem with state funding that usually escapes notice: net new funding is generally a fraction of the headline state increase, because it must cover terminated previous one-time funding or new mandated activities. 2018-19's headline increase of 7.1 percent yielded 0.7 percent as a "net available for sustaining core operations"--a fraction of that year's 3.5 percent inflation rate (Display 7).

UCOP established this 2019 narrative of UC damage to justify that year's proposal for a modest "cohort-based" tuition plan, which would allow tuition increases at about inflation, fully in place after 4 years. It was a toddler-sized foot in the door, but it was a foot. The overall plan would have brought UC's state general fund allocation to just about $4 billion.

In November 2020, the regents adopted a UCOP request for an additional $518.2 M for 2021-22.  Once again, UC would be inching towards the magical $4 B level.  $300.8M of this was trying to fill in the 2020-21 cut--to keep that reduction from forming a permanently reduced baseline. There was $157.6 M for mandatory cost increases--salaries, benefits, and debt service--and about $60 M for improving student outcomes in ways mandated by the legislature.

This month, Newsom came back with a proposal for $136.0 M. He will not backfill the permanent cut of  $300.8 M, even on a one-time Covid-19 emergency basis.  UC keeps that hole and is to receive 86 percent of what it had defined as mandatory cost increases (negotiated wage increases and benefits, among other things).  That was one of five General Fund items the regents voted in November to request. They got none of the other four, though Newsom did recommend $225M in one-time funds for deferred maintenance and some other items.  The governor's proposal would put UC's general fund at $3.6 B. That's about the level of 2017-18. It's also about the level of 2007-08, unadjusted for inflation.

In a regents' committee meeting on January 20th, UCOP officials summarized the governor's budget in a few slides. 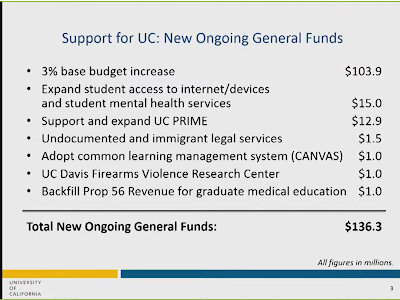 The 3 percent base increase is on the new, permanently-reduced amount. The rest are line-items that normally a public university would fund out of general operating money. UC PRIME is an example-- a diversity-oriented medical education program for underserved areas that UC Health should just pay for out of operations. Same for legal services for undocumented students, which should be funded as one among many permanent student services.

Next slide: DM gets $175 M in one-time funds, and more earmarks are added. The DM figure is about 1.25 percent of a reasonable estimate of system-wide deferred maintenance, so at this rate UC will fix this year's back log about 80 years from now.   Except it's not annual money . . . 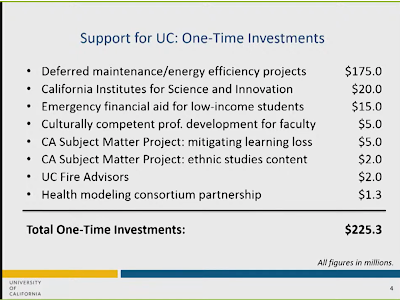 The final slide notes the continuation of the tuition freeze and an accelerated deadline for closing equity gaps in student attainment. 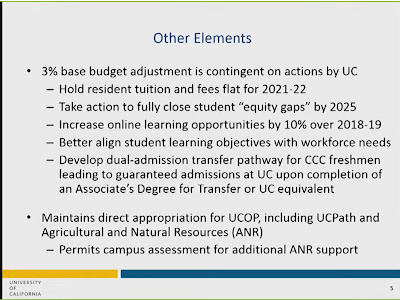 These are all long-established goals, particularly turning UC into a workforce training system, which hails from the 1980s and 1990s, and which was re-emphasized by Newsom in his first budget. Such goals are also priced in to allocations, so new efforts at pursuit will never receive a reward.
In short, Newsom restores Jerry Brown austerity in the form of frozen tuition and sub-inflation net state funding. We all hate the phrase, but this is classic "do more with less"--with no state interest in its effect on UC viability.

This budget presentation to the regents was more negative than UCOP's previous messaging about the governor's proposal. After Newsom's release, the UC president immediately thanked him for, in effect, providing one quarter of his request. This signaled to the media that the governor was being very supportive of higher education and that his proposal was good news. Poor Teresa Watanabe, the LA Times's UC & higher reporter, with her colleague Nina Agrawal, had to try to write a coherent story. They cited all three system heads calling the budget a "welcome reinvestment," to quote CSU's chancellor Joseph Castro, while noting that Newsom did not use the unexceptedly good state revenue picture to undo the current year cuts or to come close to matching the requests. The only figure in the story who suggested damage to educational quality was a (former) chancellor,  George Blumenthal, with direct experience of a campus.

Taking the LAT coverage and the UCOP budget presentation together, we have these budget stories.

One of these tales is not like the others. It is far less pleasant to consider. It is also true. But in the absence of budget context, budget history, and budget needs--absences actively generated by the first three stories--the fourth can't establish a claim on reality.  The situation keeps the quality narrative obscure. If it does, the gap between means and funds will continue to grow.

The gap is learning and research (and eating and rent-paying) that doesn't happen.
***

Data from California Department of Finance (UC general fund allocations) and from the Legislative Analyst's Office data and forecasts for state personal income growth.  Charts with tuition revenue and other details are presented and discussed here.   Photo Credit